A person who claims to be a liberal says that millions of parents who make their girls wear a hijab are child abusers and need to be called out. Now these allegations have become too common so I decided to understand and respond to them. There are four types of child abuse:

I tried my best to understand how making children wear a hijab fits into the definition of child abuse but failed. At this point I was under the impression that the gentleman is repeating the New Atheist claim that teaching religion to children is child abuse (of course it isn’t).

So just to be clear I confronted the gentleman with the example of Sikhs. After all Sikhs too make their children wear a turban from a very early age. This hit a 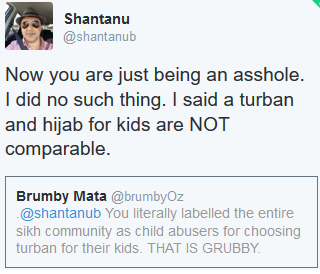 I try my best to understand what the other person is trying to say. Perhaps Shantanu is not so good at communicating his ideas, perhaps he wants to say that he has no issues with parents choosing a religious headgear for children as long as it is done for the right reasons. Sikhs do it for the right reasons and Muslims do it for the wrong reasons.

Shantanu did not say how Sikhs do it for the right reasons but he knows exactly why the Muslims do it for the wrong reasons. “To protect their modesty” he says. This also adds a new dimension to the debate. Presumably Shantanu cant read Arabic, has never read the Quran in Arabic or in English, nor has he taken any interest in learning about the history or origins of Islam, yet he is suddenly qualified to issue a sweeping fatwa on why Muslim women wear a hijab (Or are rather forced by Muslim men to wear a hijab).

Shantanu pulled out the most worn out Islamophobic trick ever. Islamophobes have little idea about what Islam is so they create their own caricature of Islam out of thin air. A caricature that they can easily mock. Not only is this caricature of Islam the truest form of Islam, they claim, but every Muslim who follows it is also an extremist.

Hijab is not a something that came with Mohammed in Arabia of the seventh century. The history of hijab is perhaps as old as the history of the Jewish tribes. Even today the devout Jewish women wear the Jewish hijab called Kisui Rosh or the kerchief. In Christian traditions, Mary the mother of Jesus Christ is depicted as a hijab clad woman. The fact that Jewish women wore some kind of a Hijab is uncontested. Mohammed in the seventh century introduced and invited Arabs to worship the God of Jews and the God of Christians. Along with that came many Jewish customs for example; Jews and Muslims don’t eat pork, they do male circumcision, Muslim and Jewish men wear skull caps, Muslims eat halal meat which is based on Jewish Kosher meat; and many such similarities. Hijab came as part of a package to Arabs. In Islam, Mary the mother of Jesus enjoys the status of being the most exalted. Devout Muslim women try to follow into her footsteps.

So wearing of a hijab is primarily not a matter of modesty, it is a matter of piety. And of course there may be many other reasons to why Muslim women wear the hijab. Pious Sikhs make their children wear a religious headgear so do pious Muslims. They are simply following the tenets of their faith which is their fundamental right. And if the argument is that parents should not be allowed to teach religion to their kids then it opens a Pandora’s box. Why stop at religion? Should parents be allowed to teach specific food choices, movie choices, clothes, school, type of education? It is open ended.

Now the question is why did Jewish women start wearing the hijab? I don’t know. Why do Muslim men wear a skull cap? Why does the pope wear a skull cap? Why did Hindus start idol worship? I can’t answer any of these questions. If we take this path of rationally evaluating faith while ignoring human emotions and spirituality then we will end up where extremist atheist end up and that is a point where they believe all religious people are deluded and they automatically have the moral authority to talk at them and harass them. The only thing that is liberal about some self proclaimed liberals today is their ability to liberally make assumptions about other cultures.

There is nothing new about supremacists getting annoyed about how children are brought up in other cultures. This is exactly what led to several stolen generations in Australia where children were snatched from their aboriginal mothers and handed over to the Church and Government run institutions, all in the name of “protecting children from abusive parenting”. The issue of stolen generations still evokes strong emotions so much so that former Prime Minister Kevin Rudd issued a teary apology to the parents and kids of the stolen generation.

Thanks to bigots in the liberal garb we are now at a point where conservatism is on the rise. These people neither have the power nor the patience nor the academic reading of the subject to convince anyone to leave the hijab but collectively they have turned the hijab into a Muslim flag of defiance. It is apparent that these people are not looking for a dialogue with the Muslim community, they are merely interested in harassment. Why else would anyone start a dialogue by branding millions of parents as child abusers?

What should have been a purely social issue is now a political issue. Especially in the West. Muslim women know about the dangers they face while wearing a hijab on a public transport yet they wear it as if they are trying to make a point. It is these women who will also pass on the hijab flag to the next generation irrespective of what Muslim men or supremacist bigots think about the Hijab.

PS: I have absolutely no issues with Sikhs imparting religious education to their kids. The Sikh example was used to expose the double standards and selective targeting of Muslims by supremacists in the liberal garb. Don’t be surprised if they go after the Sikhs in near future. They pick the flavor of bigotry depending on the news cycle.